The AHO has been publishing paper nautical charts since 1942. They are relied upon and trusted by Australian and international commercial vessels, recreational vessels and the Royal Australian Navy. 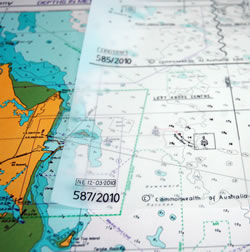 For more information about the use of paper charts in Australian waters, see Paper Charting Information.

Australian Indexes of paper nautical charts are available in paper form and as an interactive on-line catalogue.

The paper indexes are published annually in January in two sheets as follows:

The UK Hydrographic Office's (UKHO) Charts and Publications Catalogue also lists the 'Aus' and 'SLB' charts reproduced and included in the world-wide Admiralty chart series. Aus and SLB charts included provide coverage of major shipping routes and commercial ports. Aus and SLB charts which are not reproduced by the UKHO are not listed in their catalogue (but the limits are shown on the face of their reproductions). When using the UKHO catalogue, you should be aware that a more appropriate Aus and SLB charts at a large scale may be available from an AHO distribution agent. 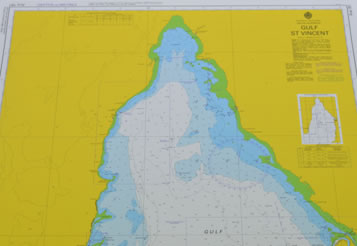 It is extremely important that all chart users keep their paper charts up-to-date for the latest safety-critical information. It is necessary to meet chart carriage regulations and to keep your vessel and all onboard safe.

Australian published paper nautical charts are updated via fortnightly Australian Notices to Mariners (NtM) Editions. However, in extreme circumstances an Austcoast warning may be issued by the Australian Maritime Safety Authority (AMSA).

The relevant notices can be found on the Notices to Mariners section of this website or can be supplied automatically, via the eNotices subscription email service.

Austcoast warnings are broadcast to mariners operating within Australian waters by AMSA across the Coast Radio Network, when new safety-critical information is too urgent to wait until the next fortnightly Australian NtM edition release.

Paper charts are also updated by incorporating all the changes in a new edition. These are produced when substantial new survey or other information is received of a size too large to promulgate via Permanent Notice or a Block update.

Comprehensive instructions on how to update paper charts for NtM updates can be found in the free Australian Chart & Publication Maintenance Handbook, also published by the AHO on this website. Less detailed instructions are also available in the Guide to Updating Nautical Charts fact sheet.

Quick guides to common symbols on charts can be found in the Mariner's Handbook for Australian Waters (AHP20), Australian Chart and Publications Maintenance Handbook and the Understanding Chart Symbology fact sheet.

Are there chart symbols that are not explained in INT1?
Yes, there are a few symbols used on Australian paper charts that are generally not included in versions of INT 1. These are listed in the Australian Chart and Publication Maintenance Handbook (AHP24).

How can I tell how up to date my chart is?
Refer to the Guide to Updating Nautical Charts fact sheet.

Accuracy and Reliability of Charts
All charts whether paper or electronic, contain data which varies in quality due to the age and accuracy of the individual hydrographic surveys that the data is founded upon.

Zones of Confidence (ZOC) Diagrams are depicted on all Australian published nautical paper charts to warn mariners which parts of the chart are based on good or poor information and which areas should be navigated with caution. The ZOC system consists of five quality categories for assessed data (ZOC A1, A2, B, C, D) with a six category for data which has not been assessed for accuracy (ZOC U). Mariners should acquaint themselves with the meaning of these categories before heading into unfamiliar waters.

Detailed descriptions of ZOC categories can be found in the Mariner's Handbook for Australian Waters and in the Accuracy and Reliability of Charts fact sheet.

To summarise the categories, mariners should be able to navigate with confidence in areas with ZOC A1 and A2 classifications. It is also unlikely that an uncharted danger exists in ZOC B areas. In ZOC C areas mariners should exercise a degree of caution since hazardous uncharted features may be expected, particularly in reef and rocky areas. More caution is required for areas with upright or approximate soundings than for italic soundings. ZOC D contains very sparse data and may not have been surveyed at all therefore mariners should enter with extreme caution. It is good practise for mariners to treat ZOC U areas with the same degree of extreme caution as ZOC D areas. 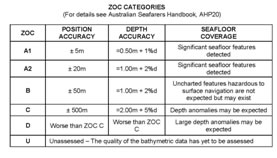 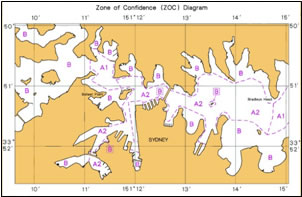